After I noticed this plant in a conservatory, I believed there was an oak tree rising. I found it was the oakleaf basket fern (Dyanaria quercifolia). Quercus is the genus title of oak bushes, so quercifolia means the foliage resembles oak leaves. The protect fronds of the oakleaf basket fern appear to be fall oak leaves after they flip brown. The primary set of pictures is from the Krohn Conservatory in Cincinnati, Ohio. I would like certainly one of these ferns for my assortment.

The Drynaria ferns are basket ferns. They’ve two totally different sorts of fronds making them dimorphic vegetation. The sterile or protect fronds, which maintain the plant to no matter it’s rising on, type a “basket”. It collects particles that falls from different vegetation, animal droppings, and water. Because the particles decomposes, it provides vitamins to the plant. The inexperienced or photosynthesizing fronds are fertile and produce spores.

Epiphytes are fascinating as a result of they develop with out soil. I’ve many tillandsias however certainly one of my favourite teams of vegetation is ferns, so epiphytic ferns intrigue me. These ferns are within the Polypodiaceae household of largely epiphytic ferns. As you may see under, the plant within the Krohn Conservatory is rising on and up a tree. Although it appears like it’s strangling the tree, it isn’t hurting it because it isn’t a parasite.

The subsequent set of images is from the Franklin Park Conservatory in Columbus, Ohio in 2015. This fern is rising on rocks which makes it an epipetric plant (rising on rocks). Isn’t it loopy that ferns can develop on rocks? 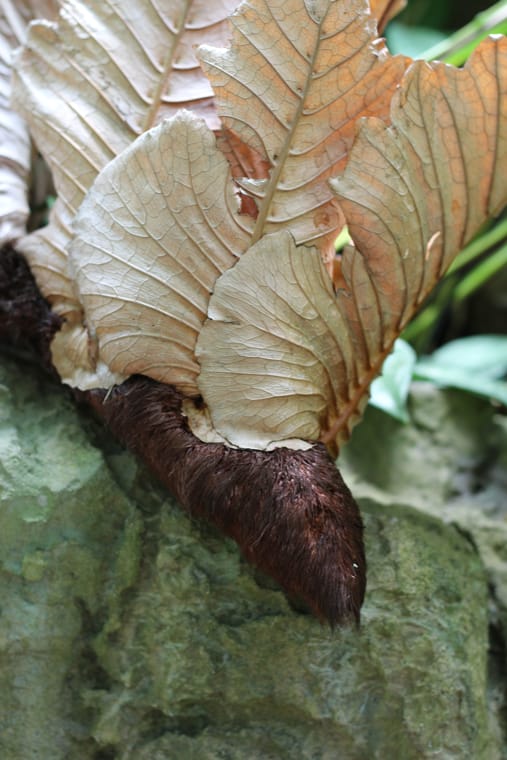 In the event you have been to see this plant in its pure habitat, you would wish to go to India, Malaysia, or Australia. However, in fact, you may go to a conservatory close to you and you could be fortunate sufficient to search out one. In the event you see one in a tree in Australia, watch out, as they’ve discovered pythons residing within the fronds of the fern. Yikes! I like them within the conservatory-just sayin’…..

Have an ideal week, plant buddies!